NASA air purifiers are a great option for anyone wanting to remove contaminants in the air. However, AirROS surface and air purifier systems offer an even more advanced alternative. The way AirROS works it uses ROS (Reactive Oxygen Species) technology that has advantages that make them worth consideration. Below is a detailed comparison of these two technologies in order to help you decide which will be best for your cannabis facility.

NASA air purifiers technology referred to as UV-based systems, are primarily referring to devices that have either only natural or artificial waves of ultraviolet light. These include UV bulbs or UV with PCO (photocatalytic) plates (Titanium dioxide).

PCO or NASA Technology is popular on the market that uses titanium dioxide to treat air, by taking in air and then reacting with UV light to produce hydroxyl radicals and superoxide ions. The majority of these reactive oxygen species cannot produce ozone and some occasionally do. They primarily try to differentiate themselves with the claims So you have to really look through their technology and to find out really what they’re basing it on.

However, for the most part, they do not have that output that is long-lived. Therefore, they are treated in the air ducts or the air that’s coming through the purifier itself. It is not really reaching surfaces when it comes to long distances. So some of them will claim surface treatment, but you have to be careful. It’s not in a lab at a set distance from the purifier, whereas it may not reach a door in a larger environment. It really is just companies marketing like that to make it sound they treat surfaces.

which break down carbon-to-carbon bonds that sanitize the air and destroys all bacteria, molds, viruses, and other pathogens as they pass through the reaction chamber.

AirROS is a patent technology that has the ability to clean surfaces AND air. Unlike NASA’s air purifier, our system will have an output from our device that they don’t have – surface treatment. If you’re looking for a solution to your indoor cannabis facility to prevent and reduce pathogens including powdery mildew, schedule a call with us today and we can get started on your customized plan! 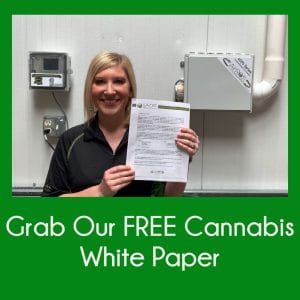